“Government alone does not have the capacity to effectively manage our lands.” 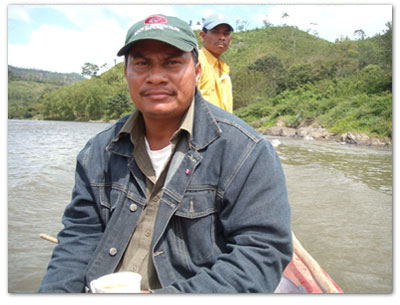 Primitivo Centeno was born and raised in the Miskito village of Pamkawas, located in the BOSAWAS Biosphere of Nicaragua. Over the last decade, Primitivo has advocated for indigenous territorial rights, while working collaboratively with Change for Children and Centro Humboldt to increase indigenous capacity in the areas of health, education, and agriculture. He was recently inaugurated as the President of the Government of Indigenous Territory – a consolidation of the three indigenous territories of Western BOSAWAS. In May 2010, Nick Churchman, co-leader of Project HOPE, traveled into the region and filmed an interview with Primitivo. The following is an excerpt from the interview:

Can you speak to us about the challenges and issues your people face?

As indigenous communities we have faced many challenges. One example is that six years ago we encountered serious problems surrounding [the sovereignty of] our traditional land. There was an invasion of the indigenous territory by mestizos. This incident increased our commitment to lobby the Nicaraguan government for official land title to our traditional territory.  As well, we are dealing with a number of social issues such as education, health, and [agricultural] production. Compared with the rest of Nicaragua, the level of [formal] education in indigenous communities is very low. As a result, we have very few professionals in our communities. Despite the fact that there is a lack of educational infrastructure in the region the Nicaraguan government has not supported us.

However, through cooperation with donors  we have built some schools. With respect to health, we have had to rely on natural medicines to treat illnesses. Given these issues we have begun to dialogue with the government to develop our own ministerial branch of government that would handle the management of education, health, agriculture, and security.
In pursuing community development, how important is the environment in your decision making?

For us, the environment means development – as families are constantly thinking about working with the environment to provide food. Historically, the environment has provided us with conditions necessary to life. The forest provided us with wild meat, which is healthier than domesticated livestock. As well, the mountains provided clean water that did not require purification…For us, the environment is our mother – we use it according to our traditional values. Recently, the government has tried to manage these resources. What we are now discovering in our discussions is that the government does not have the capacity to effectively manage our lands. As indigenous communities we have lived with the land and, therefore, we have the capacity.
Why is education so important to this community?

Currently we are in the process of implementing bilingual education in the territory. Historically students only received their education in Spanish. In order to preserve [the Miskito] language, we are trying to implement our own education system, where students can learn in their own language. This is very important to our culture…Another important area of education involves agricultural technology. Given recent pressures on our land base, we need to find new sustainable ways to effectively manage the land. The Miskito people know how much the land is important for their own needs, but they do not yet realize its importance to the rest of the world.
How important is Centro Humboldt to Miskito communities in the BOSAWAS?

In 1992 we began working with Centro Humboldt on issues facing our communities…They were very helpful during Hurricane Mitch and Hurricane Felix3. They became another source of support to us other than the government, especially to promote indigenous capacity building. In comparison to other organizations – that finance their own projects and that are not indigenous led – Centro Humboldt works to strengthen indigenous and community capacities, so that people can support themselves. This is the most important aspect of their work… It is not always easy working together; there have been difficulties in the past. But, the relationship continues to improve, as do our projects.
1 In 2005, the Nicaraguan government formally recognized land title held by the indigenous peoples of the BOSAWAS.
2 Including Centro Humboldt and Change for Children Association.
3 In 1998, Hurricane Mitch destroyed homes, crops and community infrastructure; in 2007, Hurricane Felix hit the Caribbean coast of Nicaragua, also devastating indigenous communities in the BOSAWAS.