Tammy (Chatenay) McFadden passed away on December 30th, 2010 after a long battle with cancer. As a memoriam her family is encouraging loved ones to donate to the construction of a secondary school in Walakitang, BOSAWAS, Nicaragua. Tammy’s Mother Olive Chatenay passed away in February 2009, but visited the village of Walakitang with her son, Dr. Mark Chatenay in 2008. Mark is a regular participant on Change for Children’s Annual Dental Brigades to the BOSAWAS region and will visit Walakitang again in February 2011 to announce the mother-daughter tribute to the local villagers.

Having witnessed the beauty of the rich, remote jungle of the BOSAWAS region of Nicaragua, and having experienced the beauty of the indigenous people he visited on two previous dental brigades to the region, dentist Mark Chatenay knew his mother would love it too. Described by Mark as a “generous soul with a real love for children,” Olive Chatenay accepted her son’s invitation without hesitation to join him on a Change for Children dental brigade to visit the remote villages of BOSAWAS.

In February 2008, the central Alberta farm wife with little travel experience, a big interest in charitable endeavours, and an abundance of kindness, embraced the adventure of traveling into the heart of the BOSAWAS. Olive volunteered as an assistant in the make-shift dental clinics and relished in the pure joy of making patients, particularly the children, smile and laugh. Upon her return to Alberta, Olive was truly grateful to have had the opportunity to help make a difference, and the experience continued to be a source of happiness following her diagnosis with Multiple Myeloma in May of that same year. Sadly, Olive passed away in February 2009.

Olives’s family continues to be committed to the people of the BOSAWAS region. With the passing of Mark’s sister Tammy in December 2010, the family chose to establish a memoriam project through Change for Children in honour of both Olive and Tammy. The Gifts in Memory will support the construction of a secondary school in Walakitang, one of the remote villages visited by Mark and Olive.

Although Tammy’s health never allowed her to travel to Nicaragua—remarkably battling non-hodgkins lymphoma, breast cancer, and bone cancer throughout her lifetime—, she shared her mom’s generous nature and enthusiasm for children. Mark trusts that the kind, caring, giving spirit and the courage embodied by Tammy and Olive had an impact on this world and he is comforted in the knowledge that giving back to those in need is “something they always wanted to do and is the perfect way to remember them. That’s the kind of people they were.”

Mark recently returned to the village of Walakitang while participating in the 2011 dental brigade and was able to share the story of Olive and Tammy. Of the tribute to his mother and sister, he concludes,

“We are honoured to have had the opportunity to turn a tragic thing into something good. They loved kids and wanted to make the world a better place in a very humble way. They definitely had impact on this world and [the memoriam] is definitely the perfect way to honour them.”

to contribute to this tribute. 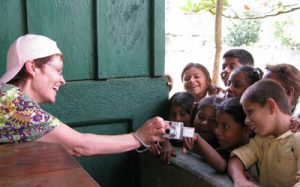 For more about the Walakitang school construction project click here.

Walakitang is the largest Miskito indigenous community in western BOSAWAS, which is a UNESCO recognized Biosphere Reserve in north-central Nicaragua. Walakitang is home to over 800 families and it is situated along the Coco River, which forms the border between Honduras and Nicaragua. The population of Walakitang and area is nearly 5,000 people, 60% of which are under the age of 18.

The indigenous peoples of this region are good stewards of their lands, the largest tract of tropical forest north of the Amazon. BOSAWAS, the “Lungs of Central America,” is an incredibly bio-diverse region and an important migratory corridor. Many of the birds we see in Canada in the summer, such as red winged blackbirds, blue herons and yellow warblers, winter in BOSAWAS.

The construction of a school here is a valuable investment for the preservation of BOSAWAS. A five-room secondary school would reap long term and far reaching benefits, including building the capacity of the indigenous population here to manage their traditional lands. Five hundred students would be direct beneficiaries of a school construction project immediately, in its first year of operation. In addition, the entire population of the BOSAWAS biosphere reserve (32,000+) will be touched by the results. Educated people in this region are few and far between, and this school will provide the indigenous population with its own educated members, qualified to seek higher education and return to the zone to occupy positions of responsibility and make intelligent and informed decisions for their people and the forest.