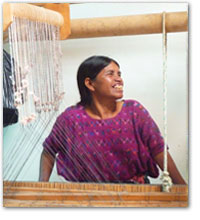 Strung from the wooden foundation of Aurelia´s adobe brick home in the Maya Mam village of Chamaque, Comitancillo, Guatemala is last season´s maiz crop – hundreds of corn ears in the shades of yellow, red, white and purplish black. These crops are the fruits of Aurelia and generations of Maya Mam ancestors´ practices of traditional planting and seed saving to preserve agricultural diversity and celebrate their indigenous culture as people of the corn. Criolla seeds, passed down by Aurelia´s family, increase diversity, resistance to the changing climate and insect plagues, and contain higher levels of nutrients than genetically modified seeds that have flooded the local markets. The latter is important given the growing rates of poverty and malnutrition amongst vulnerable indigenous populations in Guatemala – amongst the highest in Latin America.The United Nations Children´s Fund has reported that one out of two children under five years old is chronically malnourished.

Aurelia was born and raised in the northern highland municipality of Comitancillo, where 99% of the population is indigenous Maya Mam who have relied on the agricultural production of corn, beans, and squash for hundreds of years. At 52 years old, Aurelia has been witness to many changes in her small village of Chamaque and has continued to struggle against insurmountable challenges including land exploitation by the ruling mestizo class, discrimination and systematic violence against Maya Mam culture, and more recent realities that include suffering droughts and unpredictable seasons caused by climate change, environmental degradation caused by mineral extraction projects, and being forced to buy and sell their crops in a global food market where basic items for survival continue to skyrocket and remain out of reach for the poorest of the poor, including many families in Comitancillo. 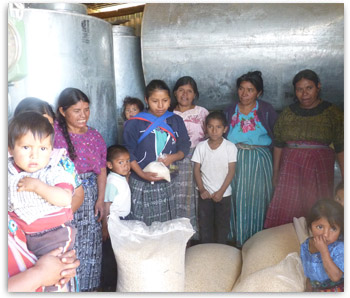 Today Aurelia is a leader in Chamaque, and throughout the Comitancillo municipality. Her story is inspiring, but not unlike many other Maya Mam women who, for the first time in their lives, began organizing in the late 1990s to address the deepening social and economic crisis in their communities. These efforts were supported by a local indigenous organization, AMMID (the Maya Mam Research and Development Association) and international community development organizations, including Change for Children Association. Through capacity building workshops that provided pathways for Maya Mam women to organize, gain leadership skills, receive literacy classes, and initiate income generating cooperatives in weaving and agriculture, Aurelia began stepping outside of her traditional responsibilities of domestic and agriculture duties, and participating in decision making surrounding local community development projects.

Through AMMID´s recent food sovereignty project, funded by Change for Children, Aurelia is part of a fourteen women strong community group in Chamaque that has gained access to food storage capital. Aurelia helps to purchase bulk corn in the local markets when the prices are low, and saves the corn in silos until the global market prices increase to levels of 300% (leaving the majority of households hungry) and sells the saved crops back to local households for fair prices. This project has stimulated local organization and helped to increase control over food production, distribution, and consumption.

Aurelia is also an active member of the women´s weaving cooperative in Chamaque. She spends four to five hours a day in the village´s Artesenal centre, where AMMID and Change for Children have installed nearly 10 weaving looms, weaving traditional clothing and textiles native to the Comitancillo region. To make an embroidered blouse or huipil, decorated in colourful bird design, it takes Aurelia nearly two weeks to complete. The products are sold in local, regional and international markets, and help women generate additional income.