Derling Frederick Martinez teaches five core subjects: Language, Math, Science, Civics, and Social Studies, but she also aims to teach her students life skills. After all, she was only a few years older than them when she became pregnant and left school before she was able to complete her own high school diploma.

In the morning’s assembly, Derling listens intently as the project team explains the technology project being rolled out in the coming days and months. She is eager to take part and for her students to learn the 21st century skills they need – communication, research, working in groups, critical thinking and gender equality.

Derling’s classroom boasts a chore chart where boys and girls alike share responsibilities. There is no gender bias under her rules. Today, she eats lunch with a dozen young girls eager for her attention. She encourages them to be whatever they want to be when they grow up. She points out two particularly driven girls; one wants to be a doctor and the other, an engineer.

For their sake – for all her students’ sake – Derling is happy that the technology project is being introduced. She is eager to give her students the best education she can. She especially looks forward to exploring the virtual library.

“Here in Bosawas, we never have enough books. And the books are old. The world is changing and we want to keep up! We also want to learn more about our own culture and the other cultures of the world.” 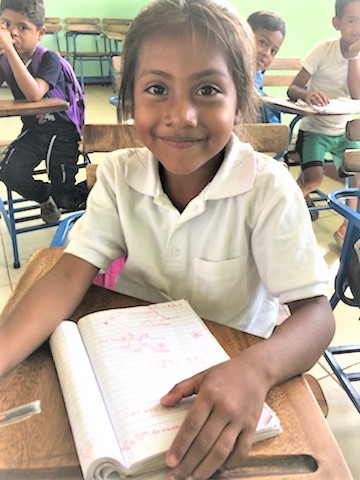 She turns to the only page in her Nicaragua geography textbook that mentions the Bosawas. There are fewer than 500 words – seven paragraphs. And, not surprisingly, the information is out of date. Despite the current lack of resources, Derling uses the Spanish word animarlas to describe what she hopes to do for her students. I like the sounds of it even before learning the meaning: to encourage, to drive, to cheer on – to animate!

Derling’s classroom will soon be equipped with a mobile learning lab including a Remote Area Community Hotspot for Education and Learning (RACHEL). She will soon have access to a Massive Open Online Course (MOOC) which will allow her to improve her skills as a teacher and perhaps even obtain her own high school diploma – an achievement that would mean a salary from the Ministry of Education.

With her own family to support and pupils to animate, encourage, and inspire, Derling is motivated and excited to be part of the movement toward better education, empowerment, and equality.

You, me, Profé Martinez, her students — We are all part of #GenerationEquality.